There’s a brand-new Civic on the way for the 2022 model year, and while Honda isn’t quite ready to rip the covers off (that’s coming Tuesday, November 17, at 9:45 p.m. on the East Coast or 6:45 p.m. out West), the Japanese automaker hopes to whet the appetites of potential owners with the teasers you see above and below (we bumped up the brightness to bring out as much detail as possible). The image is purposely obscured, of course, but we do get to see enough of the rear shapes to suggest the new version will be more gracefully styled than the current version.

Though we only have one view, it does seem that the overall shape of the lights and the exaggerated spoiler shape match up with the patent images of the sedan we saw a few months back. If those prove accurate, expect the 2022 Civic sedan to have a swept-back style similar to the current Accord. Patent images of a hatchback have also been found. 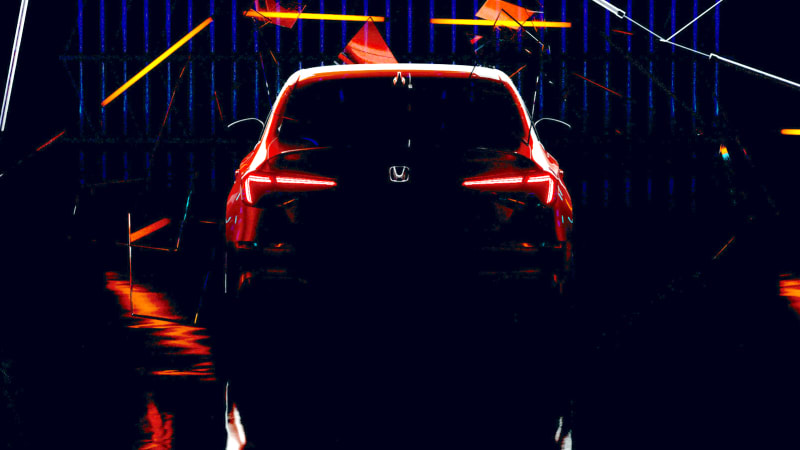 Honda is taking an interesting approach to the next Civic’s online reveal. The whole shebang is being broadcast on Twitch — a first for the industry — on Honda’s Head2Head Twitch channel. The event will be hosted by Rachel Seltzer and MonsterDface, who will be joined by a quartet of top Fortnite players and another four top Twitch streamers. Those eight participants will form two teams and battle it out in Fortnite. The reveal and gameplay will also include a performance by Grammy-nominated recording artist Cordae.

Honda says the 2022 Civic Sedan will launch in late spring 2021. Here’s hoping we get more details on further Civic variants before that time, particularly of high-performance models like the Si and Type R.