2022 VW Arteon Review: For those who’ve outgrown their GTI


The 2022 VW Arteon attempts to be the answer for those who have outgrown their GTI or Golf R. That might seem ironic given that the GTI has long been described as the only car you need. It’s fun, well-made, well-equipped, reasonably efficient and practical. Ditto the Golf R, which adds even more fun and all-weather assurance thanks to its all-wheel-drive system. The trouble is, practicality tends to be redefined once you need to put a kid in the back seat and the mountains of stuff they require in the trunk. A GTI could get the job done, but it wouldn’t be easy. Enter the Arteon.

For 2022, it now has the same new engine as the new Golf R, a 2.0-liter turbocharged inline-four that produces 300 horsepower and 295 pound-feet of torque. It offers the previous Golf R’s Haldex all-wheel-drive system, but comes standard with front-wheel drive. That’s a massive amount of thrust to channel through the front wheels only, but it manages to quell torque steer remarkably well … just like the GTI, actually. And indeed, the Arteon absolutely feels like it sprouted from the same branch of the family tree as the GTI and Golf R. That hasn’t always been the case with the Arteon, but this latest iteration absolutely does ­– even if this larger, heavier car on an older variation of VW’s MQB platform unsurprisingly can’t match the verve of its smaller, newer siblings. It’s a fun car to drive, and its massive back seat and Audi Sportback-style trunk grant it that extra practicality that those who’ve outgrown their GTI or Golf R are looking for. It’s definitely a more engaging alternative than a Taos or Tiguan.

Unfortunately, the Arteon starts to make less sense once you look outside the Volkswagen family. Its starting price is north of $40,000 with a loaded SEL Premium R-Line that crosses $50,000. That might be reasonable given the Golf R’s price tag, but you’re in luxury sedan territory there, with a list of alternatives that would make this paragraph laughably long. True, the Arteon is now more powerful than most of those at this price range (usually considerably so), but the fact remains that a Volkswagen sedan will never be considered a luxury sedan. Even if some might consider it the only car they’d need.

As described above, the Arteon gets the new Golf R’s EA888 evo4 engine and DSG transmission for 2022. The base SE also gains the R-Line’s sportier looks. This is on top of a substantial overhaul last year that brought chassis improvements (the steering in particular is dramatically better), higher quality interior materials, updated tech and tweaked styling. 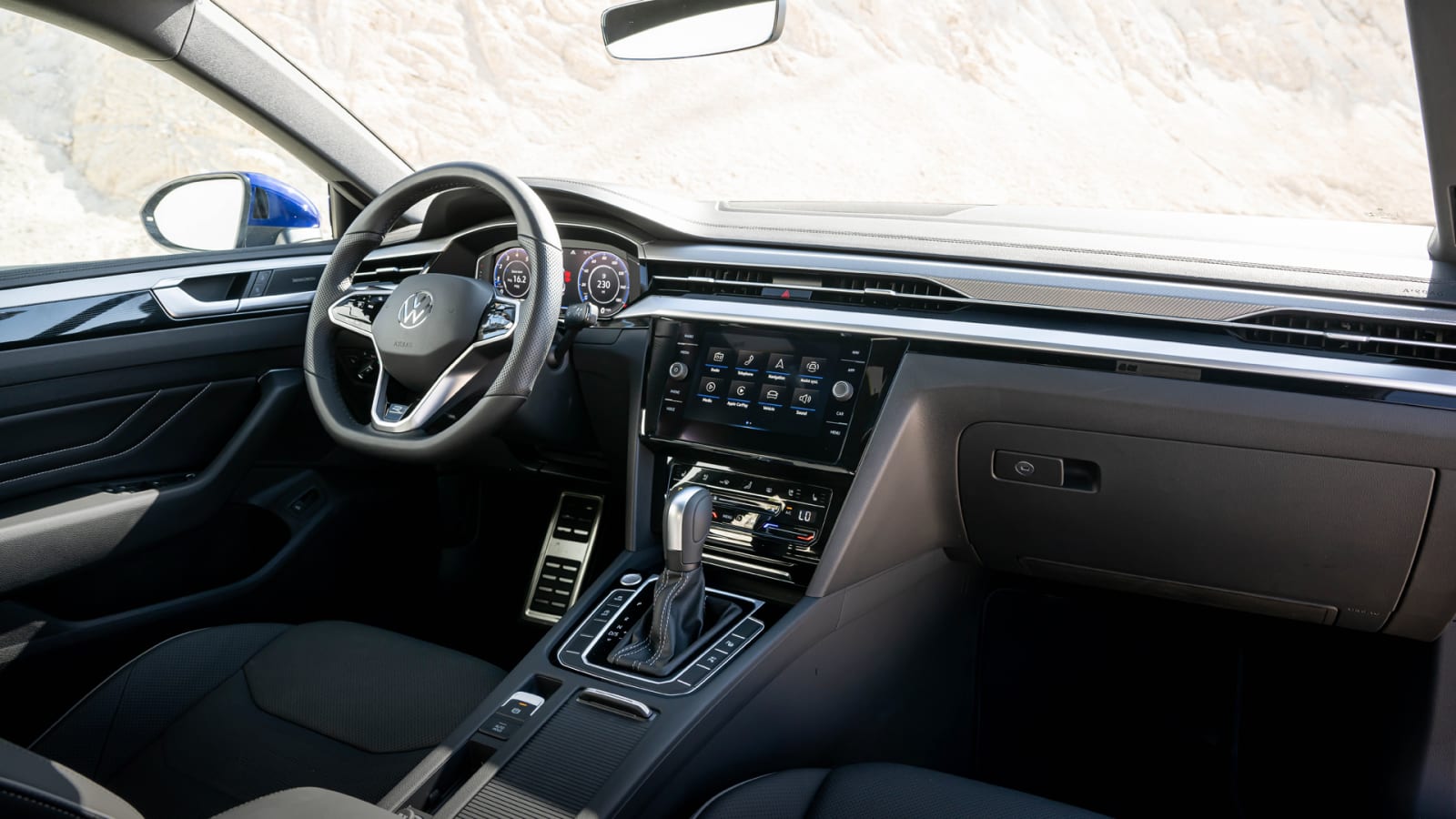 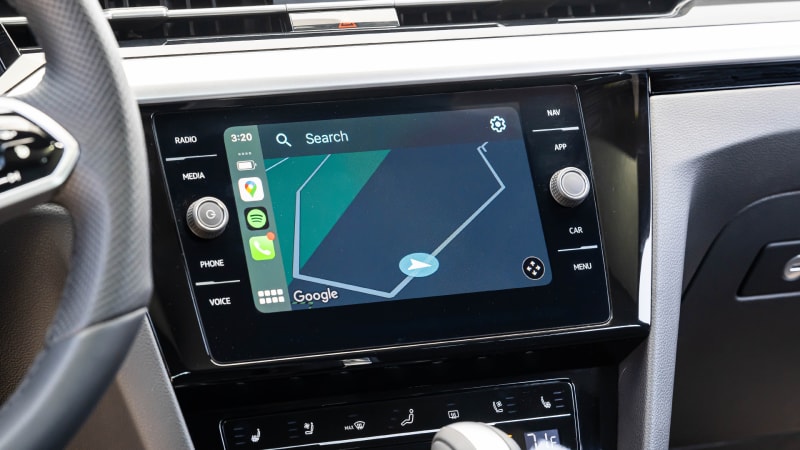 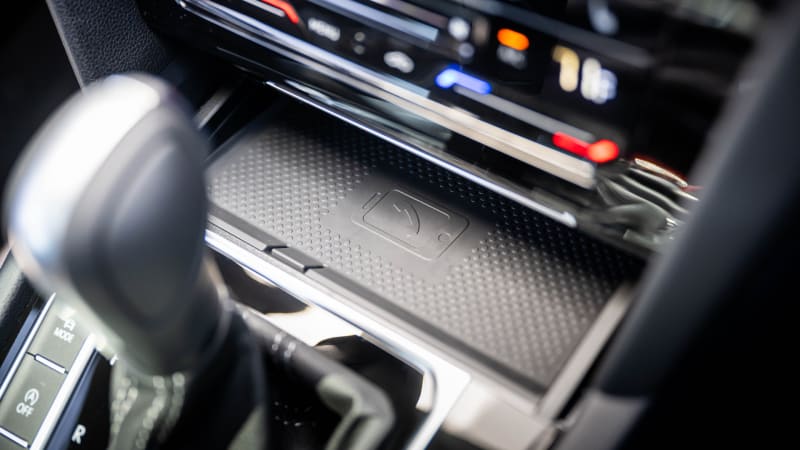 What are the Arteon interior and in-car technology like?

As much as Volkswagen improved the Arteon’s interior last year with higher-quality materials and better trim, it really only brought it up to snuff for midsize sedans like the Honda Accord and Hyundai Sonata. There’s absolutely nothing wrong with those ­– they have lovely interiors, but they also don’t start higher than $40,000. Compared to a similarly priced Mercedes, Audi, Acura, Genesis, etc., it’s quite simply not as nice as those.

Is it better than a GTI or Golf R? Absolutely, both in terms of materials quality as well as technology. The Arteon comes standard with Volkswagen’s Digital Cockpit instrument panel and an 8-inch touchscreen that features VW’s previous generation tech interface. That’s actually a good thing, since the newer system in the GTI and Golf R is a hair-pulling affair. 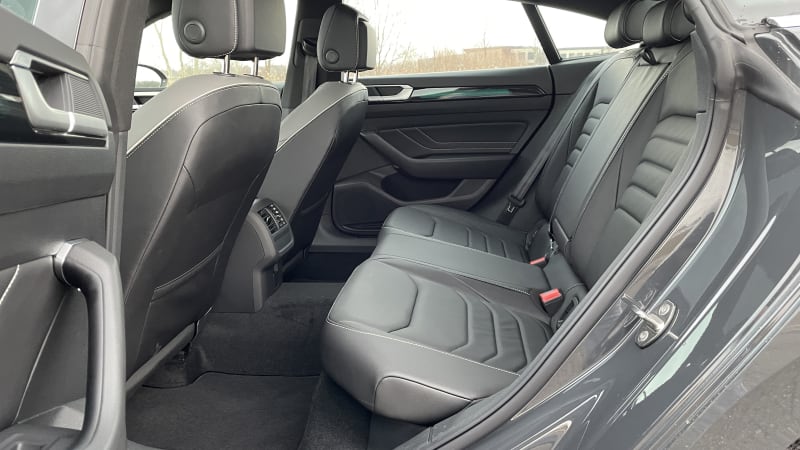 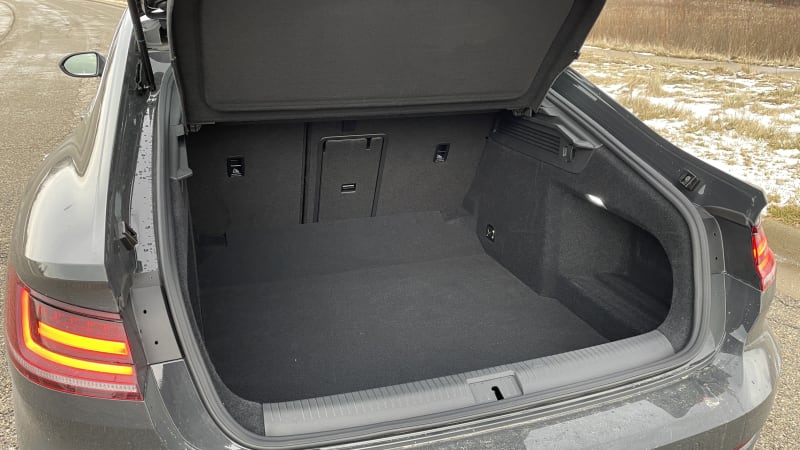 How big is the Arteon?

The Arteon offers a clear size advantage when compared to VW’s hot hatchbacks as well as similarly priced luxury cars. Although ultra-sleek sedans like the Arteon have traditionally come attached to a reduction in practicality, that’s not the case here. The back seat provides plenty of legroom even when the driver seat is pushed all the way back, while providing sufficient headroom for someone 6-foot-3. It’s actually similar to a Honda Accord or Toyota Camry.

The trunk is similarly impressive. Opening its gaping hatchback lid reveals 27.2 cubic-feet of maximum cargo space, which is about 10 more than you’d get in a traditional family sedan. It’s also what you’d find in many small SUVs, although that volume is achieved in the Arteon with greater cargo area length and less height. Once you remove the rigid cargo cover and lower the 60/40-split back seat, you’ll be able to transport large, boxy objects that don’t have a prayer of fitting in one of those sedans. Now, they won’t be as large or boxy as what you can manage in an SUV (or even the GTI and Golf R with the back seat down), but this is nevertheless one of the Arteon’s best attributes.

What are the Arteon fuel economy and performance specs?

Every Arteon is powered by a 2.0-liter turbocharged inline-four that produces 300 hp and 295 lb-ft of torque. A seven-speed dual-clutch automated manual, dubbed DSG, is standard. The base SE R-Line is front-wheel-drive, while the SEL R-Line and SEL Premium R-Line have 4Motion all-wheel drive.

EPA-estimated fuel economy is 24 miles per gallon city, 34 mpg highway and 28 mpg combined with front-wheel drive, which is excellent for such a powerful car. It falls to 22/30/25 for the all-wheel-drive trim levels. 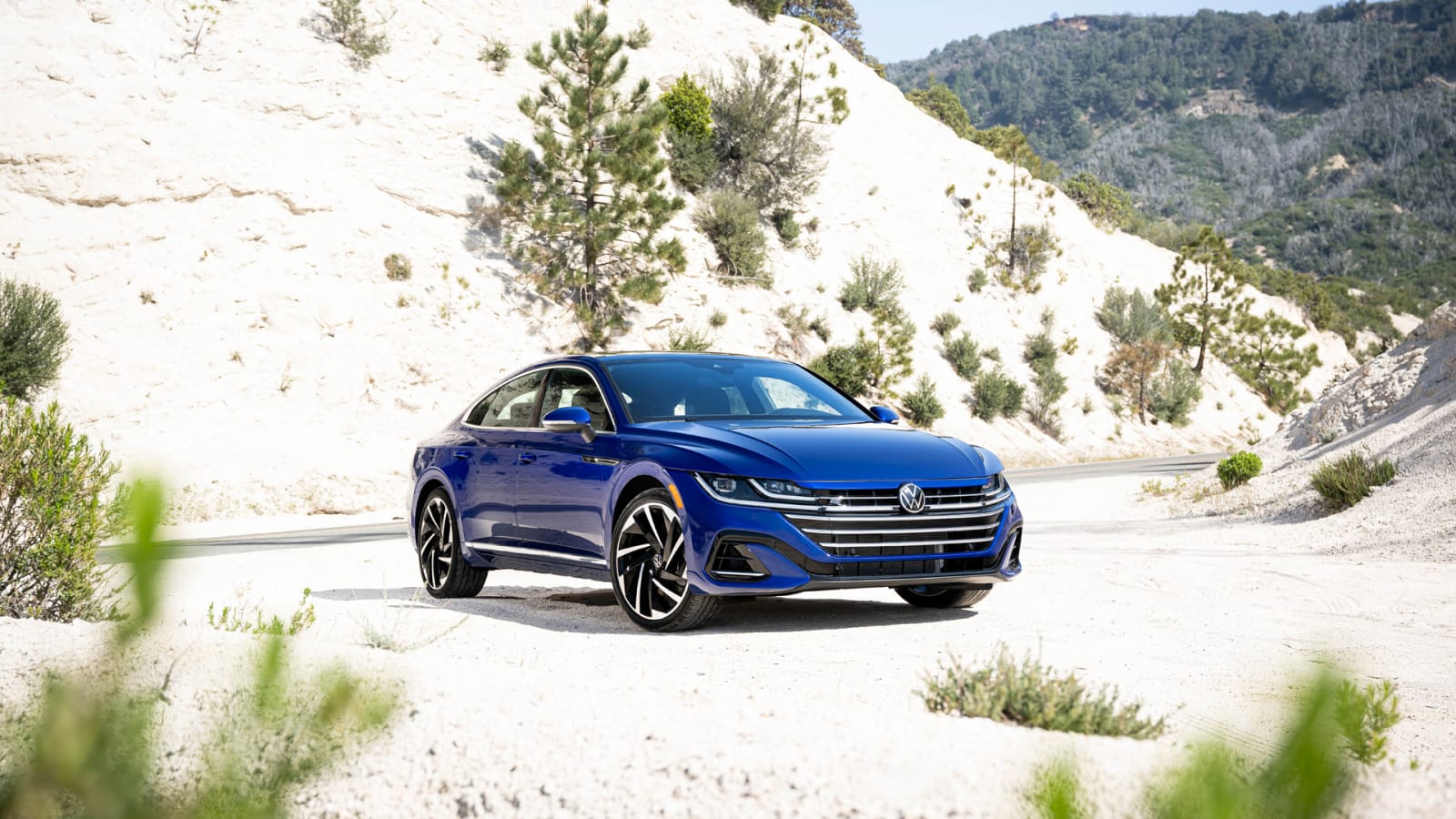 After last year’s chassis upgrades and this year’s serious power infusion, the Arteon now drives like it sprouts from the same branch of the Volkswagen family tree as the GTI and Golf R (as opposed to the old Passat). The steering’s effort and response are indicative of the GTI’s, as well as its ability to quell torque steer with front-wheel drive. It impressively won’t saw the wheel out of your hand when you gun those 300 horses and 295 lb-ft. They will, however, overwhelm the traction control system and causes wheel hop, which is why opting for all-wheel drive is still a good idea. It sends as much as 50% of available power to the rear, reacting to and anticipating reduced traction up front. A brake-based XDS “cross-differential” system mimics a limited-slip differential by braking the inside rear wheel while turning in order to reduce understeer.

We found the Arteon surprisingly fun to drive around tight, technical mountain roads – either with front- or all-wheel drive. There could definitely be more feel from the steering, but that can be said about many sport sedans. The standard adaptive suspension firms itself up depending on drive mode: Comfort, Normal or Sport. There’s an Individual mode available to mix and match your choices, which we utilized after finding the Sport suspension a bit too firm on an extra-bumpy stretch of mountain road. This variability and customizability are appreciated and certainly more indicative of a luxury sport sedan than a Honda Accord, for instance. Indeed, many luxury sedans don’t include adjustable suspensions at this price point. Ride quality is very good, and we found interior noise levels to be reasonable.

What other Volkswagen Arteon reviews can I read? 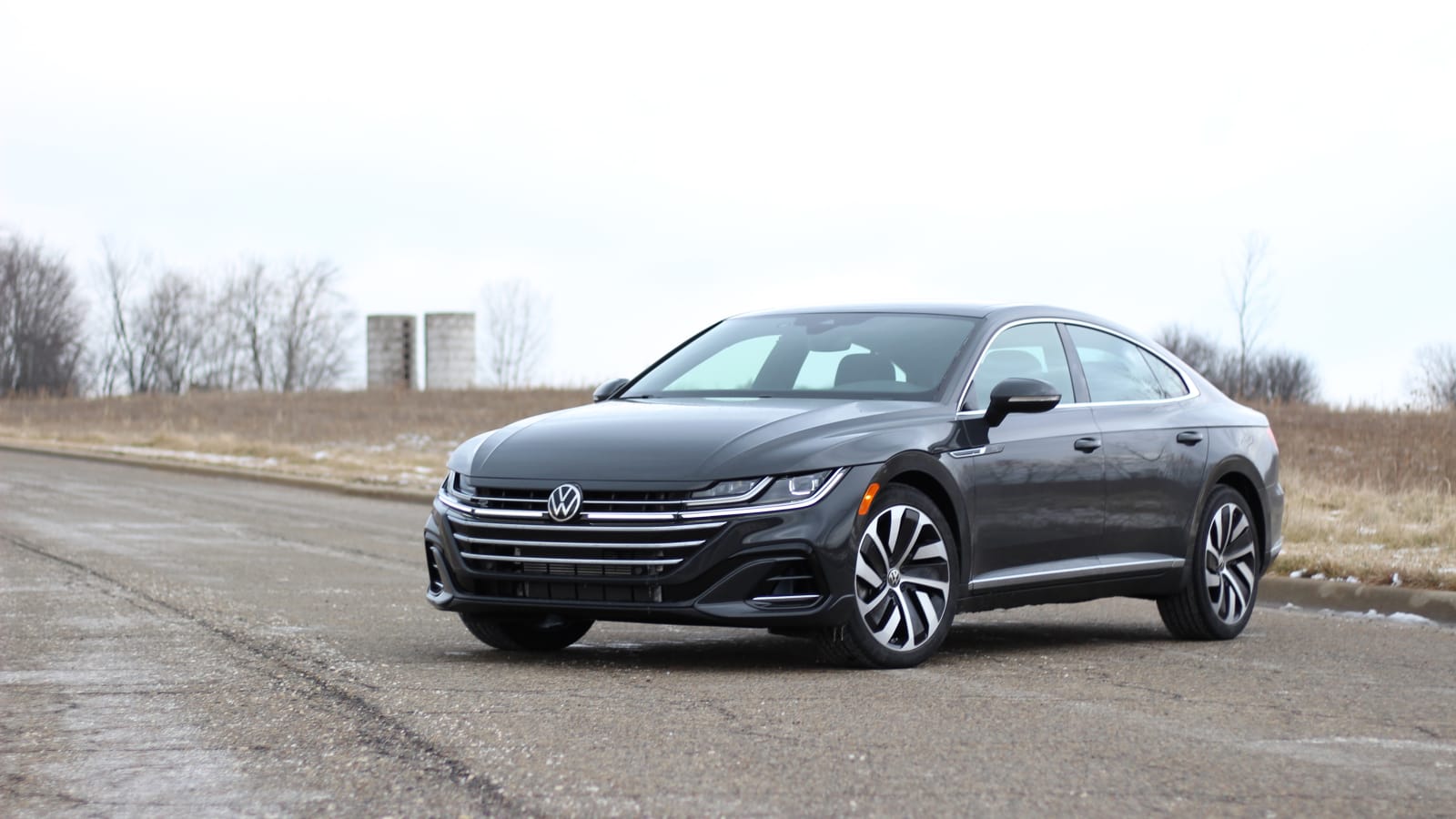 As with other Volkswagens, there are no factory options.

What are the Arteon safety ratings and driver assistance features?

The Insurance Institute for Highway Safety named the 2022 Arteon a Top Safety Pick, its second-highest award. It received the best-possible ratings in crash tests, as well as for its automatic emergency braking system’s vehicle-to-vehicle front crash prevention. Its vehicle-to-pedestrian performance was sufficiently ranked high as well. Its base LED headlights were rated “Poor,” however, while the SEL’s adaptive units were given the best-possible “Good.”