It’s a big world out there and BMW has the necessary logistics to cater to regional markets with special edition models. Case in point, the South African division has prepared another pair of Mzansi Editions as a follow-up to last year’s 3 Series and X3. The latest duo goes a segment below as the limited-run models are based on the 1 Series hatchback and the 2 Series Gran Coupe.

Specifically, the new Mzansi Editions are available as the 118i, 128ti, and 218i. Ok, but what does Mzansi stand for? It represents an informal name for South Africa and is being used for high-end versions of these two small BMWs. In the case of the 1 Series models, you get the M Sport Package as standard, along with a glossy black grille, front spoiler attachment, and side sills. At the back, the exhaust tips are finished in black chrome while the 128ti hot hatch gets a carbon fiber diffuser.

Stick to the 118i and you get 18-inch wheels while upgrading to the 128ti comes along with 19-inch alloys. In both instances, the cars are fitted with red M Sport brake calipers while their bodies can be painted in Alpine White, Black Sapphire, or Skyscraper Grey. In addition, the 118i can also be had in Melbourne Red Metallic and Misano Blue Metallic whereas the more potent 128ti is available in Storm Bay Blue Metallic.

For the interior, the two 1 Series models share a panoramic sliding roof and the BMW Live Cockpit Professional. The lesser 118i boasts sports seats in a Trigon and Sensatec combination in black with M seat belts while the 128ti’s seats are wrapped in black and red cloth with Sensatec, which is BMW speak for synthetic leather. 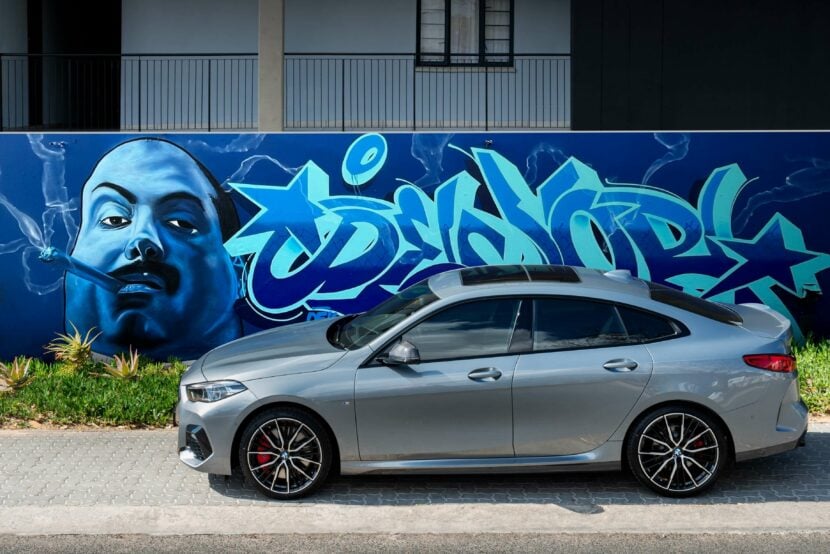 As far as the 2 Series Gran Coupe is concerned, the swoopy 218i sedan also gets the M Sport Package with high-gloss Shadow Line details noticeable on the kidney grille, and trunk lid spoiler. Its tailpipes also come in black chrome and there are M Carbon side mirror caps to spruce things up a bit. M Sport red brakes paired with 19-inch wheels featuring a double-spoke design round off the tweaks on the outside.

BMW South Africa is selling the 218i Mzansi Edition in Alpine White, Misano Blue, Melbourne Red, Black Sapphire, and Skyscraper Grey. Inside, the Gran Coupe has black sports seats with M-branded seatbelts, along with a sliding glass sunroof, and the BMW Live Cockpit Professional.