Normally I write car reviews with the general thought that someone reading the thing might actually use it to determine whether buying one is a good idea. But a Mercedes-Benz Sprinter Cargo Van with the 170-inch wheelbase and high roof? Who can this really be for? The owner of a rooter company? FedEx? The Royal Mail?

So this is going to be different: a chance to experience and share what it’s like to drive one of these gigantic, high roof vans that have become increasingly common in this age of e-commerce. It also provided a taste of what #vanlife would be like for all those folks who buy a Sprinter like this, jack up the ride height, slap on some all-terrain tires and glamp out the interior to venture into the great outdoors … and really piss off everyone at campsites who don’t have one. I’m not entirely certain as to why, but I’ve gotten that impression.

In short, the Sprinter sure is different. The driver’s door unlocks with a metallic clack and pops open to reveal a driver seat perched at roughly torso height upon a body-colored metal box. In this case, Royal Mail red. You put one foot onto the cutout plastic step area and hoist yourself up into the cab, plopping yourself down onto the cushy, leatherette-clad driver seat. And yes, it’s officially “leatherette” rather than Mercedes’ usual MB-Tex. That would be a convincing leather substitute. This stuff is pure, sticky vinyl, which sure paired nicely with 90-degree days and several acres of windshield. Butts will be scorched, but at least it’s only a $62 option. No, I didn’t leave off a zero. It’s really just $62. 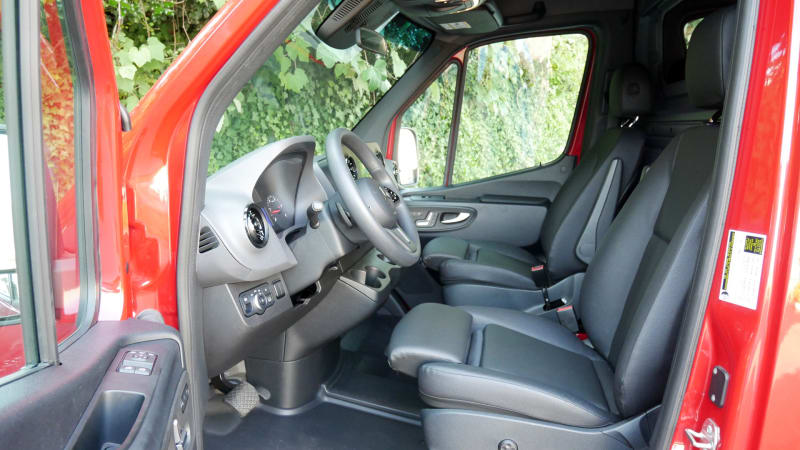 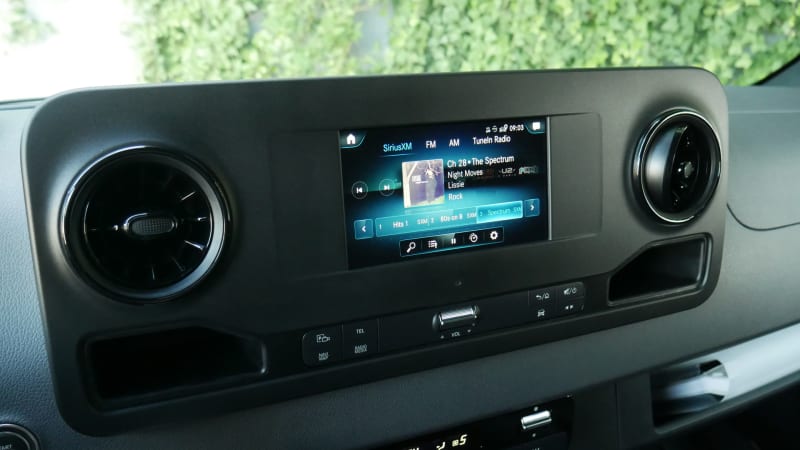 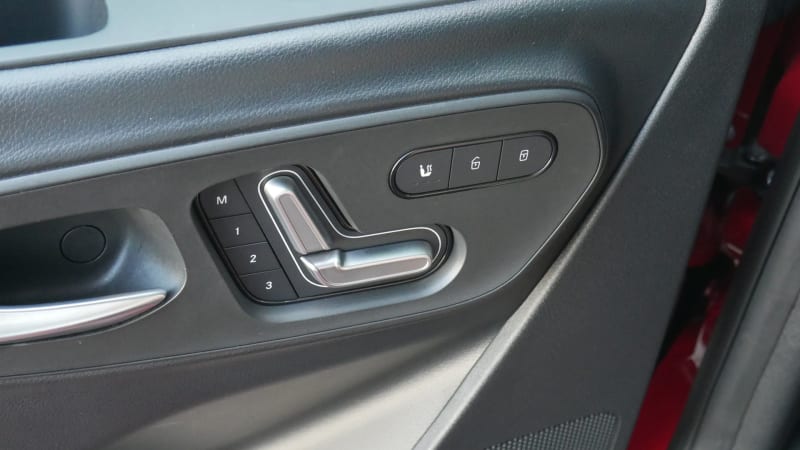 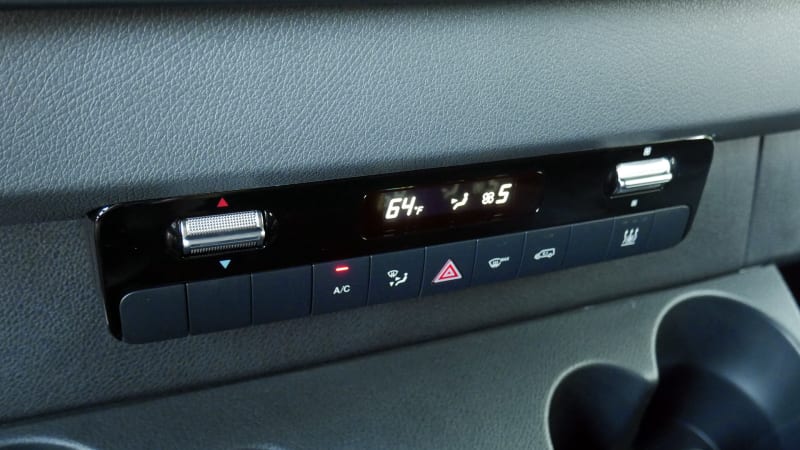 To crank up the air conditioning to alleviate butt scorching, nudge up the fan speed toggle to max. The Sprinter has manual climate control even though that toggle and the other buttons are normally utilized in the automatic climate control arrays of other Mercedes. This is just one of many examples where familiar Mercedes components are employed in a very unfamiliar way. The touchscreen features the same menu structure and graphics as an MBUX-equipped Mercedes car or SUV, but the display is tiny and doesn’t have a redundant center console touchpad. It would need a center console for that. The cool rotary air vents are shared with the GLB and other A-Class-derived Mercedes, but all the hard, scratchy plastic surrounding them most certainly is not. Similarly, the steering wheel design, controls and accompanying column stalks may be shared with a GLB, but it’s not wrapped in leather and adorned in metallic plastic trim. Its left-side menu buttons and touchpad operate an old-school, black-and-white trip computer screen between plain-Jane analog gauges. There’s no all-digital display here with multiple design layouts and dance club lighting.

There are multiple seating options available, including a suspension seat, a swiveling seat and “comfort seat” that adds additional manual adjustments. This Sprinter, however, came with the optional Comfort Plus power driver seat that’s motored into position using Mercedes’ usual door-mounted seat controls. It also includes manual thigh extension. With any of these choices, the seating position is akin to sitting on a kitchen chair with pedals at your feet. Taller drivers may find the seat doesn’t scoot back far enough and it’s not clear whether this van’s optional partition is to blame. It definitely renders the rearview mirror vestigial, though. I just pointed it up at the roof to remind myself not to look at it, but former Autoblog contributor Dan Edmunds discovered that if you leave it in place, it conspires with the partition window and dark cargo area to become a forward-view mirror. It gets quirkier.

Above that mirror are plastic shelves perfect for storing clipboards and such for FedEx drivers, and probably a boatload of Whole Foods trail mix for the glampers. Additional storage is found on top of the dash where the USB ports exclusively reside in a plastic bin behind the infotainment system. There are also cupholders up on top of the dash’s outer portions, including behind the instrument panel, which is exactly where I want to stash my hot coffee. There are four additional upholders in the traditional van location below the climate controls. In total, there are six cupholders for two seats.

Above the driver is enough headroom for Abe Lincoln to sit comfortably without removing his hat or, alternatively, all 6-foot-3 of yours truly to stand upright between the seats with my head just grazing the headliner. In the even-taller cargo area of this high-roof Sprinter, I can walk about without thinking twice about ducking. That would be why these make such good campers – fancy off-roading versions or otherwise. 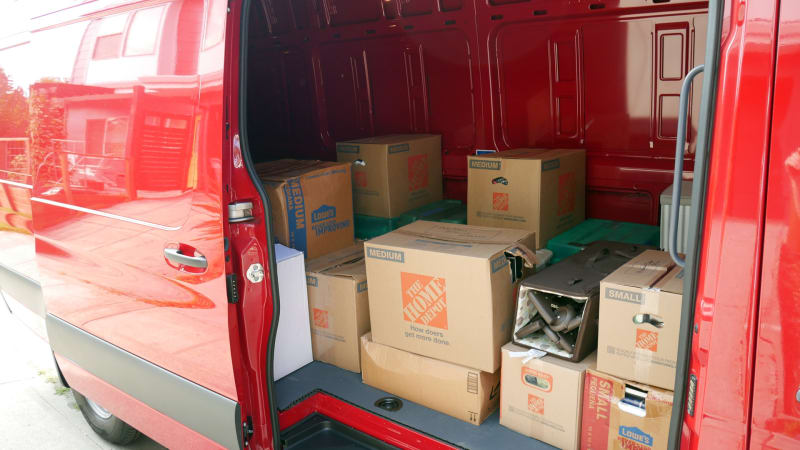 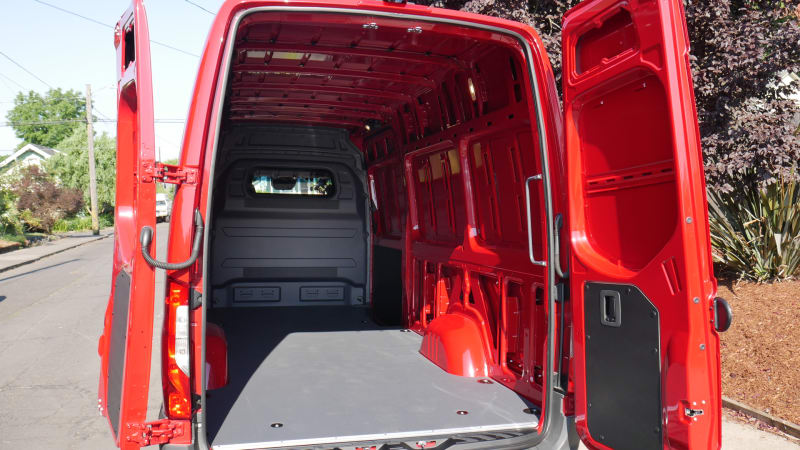 The climb into the cargo area is also much lower (27 inches) than an old-school cargo van like GM’s Chevy Express and GMC Savana, let alone a pickup. Lifting a heavy metal side table into and out of the Sprinter’s side door was exponentially easier than hoisting it into a pickup bed would’ve been. Honestly, I don’t think I would’ve been able to do it at all. And that’s only one reason a cargo van like this is wildly more helpful at hauling stuff than a pickup. While I transported more than 20 boxes and Rubbermade bins from my house to a storage facility in three trips in full-size pickups, I managed to lug the whole load in the Sprinter with minimal stacking or Tetrising. There was room to spare, too. Even though this is a pretty extreme van in terms of size (there’s an even longer version available that uses the same wheelbase), this experience definitely showed the benefit of having such a low, cavernous and easily maneuvered space for hauling heavy and/or plentiful objects. It was obviously sufficient for hauling light, comparatively unplentiful luggage.

And speaking of maneuverability, one attempt at parking is all it takes to make you go “wow.” The turning circle of this particular Sprinter version is 47 feet, which may be 7 feet wider than a Mercedes GLS, but this Sprinter is also 5-foot-8-inches longer than a GLS. The wheels turn so much that it almost feels like when a line is attached to a boat’s bow to pull it laterally towards a dock; an impression certainly enhanced by the fact you’re basically sitting atop the front axle.

Once underway, that tall, forward seating position and Crystal Palace windshield provides astonishing visibility. Only buses and other commercial vehicles are bound to beat this. Maybe the Popemobile, but Francis obviously isn’t driving. Pull from the turbodiesel engine is strong and well-suited to a vehicle like this (the only gas option is a 188-horsepower inline-four, which must challenge only the Columbia Glacier for rapidity), and when unladen, its 325 pound-feet of torque are enough that it definitely doesn’t feel slow. That said, this van’s optional 3.0-liter turbodiesel inline-6 is being discontinued for 2023. A twin-turbo diesel inline-four is going to replace it and, despite having fewer cylinders, will produce more power and torque. There will still be a single-turbo diesel inline-four offered, but it’s also new. The gas four-cylinder continues on to race Galapagos tortoises. A nine-speed automatic will also debut to replace this van’s seven-speed, which was perfectly innocuous, but more gears is rarely a bad thing when hauling heavy loads.

Driving a 23-foot-long vehicle obviously requires some altering of your driving, with turns being the main point of concentration. You have to swing wide as you might in a pickup, but since you’re so far forward in the vehicle, you physically end up even further out beyond your normal spot when turning. Imagine being mounted to the hood of an F-350 while turning right and you’ll get an idea. The ride is decent, but this was a 2500 model. I’d imagine a 3500 or 3500XD would be a tad Flintstone-ish should you happen to drive those dually versions unladen.

The other main thing to keep in mind is height. And not just “Don’t drive the 9-foot van into a parking garage.” The sides are so tall that trees become an issue when parallel parking on city streets … or even just driving along city streets. This is probably a big reason the FedEx guy parks at the end of your driveway or curiously far away. And remember, this was an unmodified high-roof Sprinter. The glamping overlander versions have jacked-up ground clearance and all-terrain tires, plus probably an auxiliary air conditioner, paddleboards and a Yakima cargo box on the roof. I’m not exaggerating, either. There are several in my neighborhood, all outfitted like this to some degree.

None are painted Jupiter Red, however, which was a C-Class color not too long ago. Although most of the Sprinters you see are painted black, white or gray (possibly the most Mercedes thing about them), there is a surprisingly vibrant collection of paints available. Besides this Royal Mail-appropriate livery, you can get the teal-like Aqua Green, robin’s egg Brilliant Blue, sunny Calcite Yellow, two additional shades of red (Sunset and Velvet) and four shades of darker blue (Steel, Vanda, Cavansite and Black Blue).

So that’s what the Sprinter is like in a tiny nutshell. To be perfectly honest, it’s not like I’m bringing to the ballgame my usual deep well of comparative test drive experience. I’ve never driven a Ford Transit, it’s been five years since I drove a Ram Promaster on a closed course and 10 years since I commanded a Nissan NV. One of GM vans? I’m pretty sure I was in high school the last time Chevy had an Express in the press fleet … and I’m 38.

As such, I’ll leave comparative analysis including cost, size, payload, etc, to someone more qualified. As I see it, though, the one clear reason to get a Ford or Ram instead of the Mercedes is maintenance and repair. If something breaks on your glamping overlander in the middle of nowhere, it’s going to be a lot easier to find a Ford dealer than a Mercedes or Freightliner (maybe?) facility. But that’s all I really got. The main point is ultimately: driving a gigantically high and long Mercedes-Benz Sprinter 2500 is a real trip. I highly recommend it. If you can do so without needing to get hired by FedEx first, all the better.