Although the 5 Series G30 was officially unveiled six years ago, it has aged like fine wine and doesn’t look outdated at all even if its competitors have been refreshed in this timeframe. The Life Cycle Impulse introduced in 2020 made subtle changes to a winning formula and the current 5er remains as desirable as ever. It’s especially true if we’re talking about the M5 featured in a new video.

A hotter Competition model, the super sedan is being showcased at BMW Welt in one of the most interesting Individual colors available for the M5. We’re talking about Zanzibar II, a metallic paint we wouldn’t mind seeing on just about all models. Being an M car manufactured in 2022, it wears the 50 years of M anniversary emblems at the front and rear as well as on those 20-inch wheels with a two-tone paint. 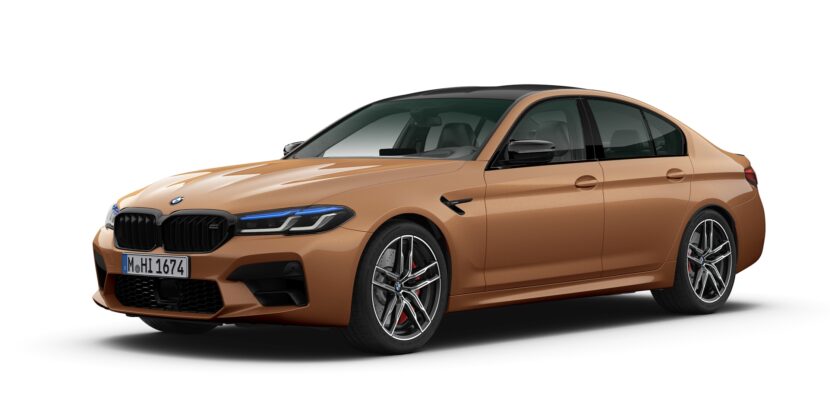 As with just about all cars exhibited at BMW Welt, this M5 Competition is a high-spec version with laser headlights and quite a few Individual goodies. The blacked-out accents are part of the Shadowline upgrades and we should also mention the optional sports exhaust system. Inside, it has been configured with the extended Merino leather, ventilated and massaging front seats, an Alcantara headliner, and soft-close doors.

Outside of the limited-run M5 CS, this Competition has to be one of the most expensive M5 F90 builds since it has everything from the Bowers & Wilkins surround sound system to a smoker’s package. A rear-seat entertainment system is included, as is the M Driver’s Package raising the top speed to 189 mph (305 km/h).

It’s the last of the pure ICE breed considering the next-generation model will have a plug-in hybrid powertrain borrowed from the forthcoming XM SUV. Codenamed G90, the new M5 is believed to go into production in July 2024, with an M5 Touring to follow in November of the same year and head to the United States.