When it comes to drag races, dedicated performance cars spring to mind. However, it’s a brave new world out there and people are racing just about anything you can think of. That includes SUVs, electric ones at that. Case in point, Hagerty pitted the Genesis GV60 against three other sports utility vehicles that don’t have combustion engines, specifically a Ford Mustang Mach-E GT, a BMW iX, and a Tesla Model Y. An honest-to-God sports car, the Chevrolet Corvette (C7) was the guest star.

The excellent Jason Cammisa provides the commentary and is left impressed with the acceleration delivered by the South Korean electric SUV. The version used was the Performance AWD with dual motors making a combined 483 hp and 516 lb-ft of torque in a vehicle that weighed 4,862 lbs. Finished in a splashy yellow hue, the Mach-E with a pony car’s name was the spicy GT in the Performance Edition flavor with 480 hp and 634 lb-ft moving a 5,001-lbs SUV.

As for the iX, Hagerty picked the regular xDrive50 rather than the hotter M60. The BMW was the heaviest (5,707 lbs) of the trio but also the most potent in terms of horsepower, packing 516 hp. Its dual-motor setup is good for 564 lb-ft, so more than the Genesis but less than the Ford. Due to the extra bulk, the Bavarian SUV was the slowest at the start, but it eventually caught the high-riding Mustang. However, it had to settle for second place as the GV60 was quicker. 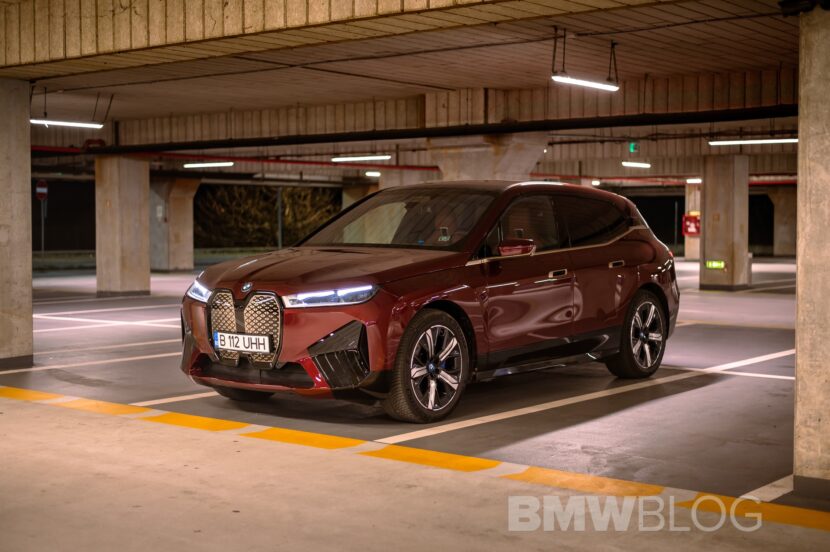 Although the iX xDrive50 didn’t win the drag race, it had the highest trap speed of the three electric SUVs by crossing the finish line while doing 114 mph (+4 mph than the GV60 and +12 mph than the Mach-E). It was a tenth of a second slower in the drag race, needing 12.4 seconds to complete the quarter mile.

The Genesis went on to drag race a hardcore Z51 version of the previous-gen ‘Vette and both finished the duel in 12.3 seconds, which coincidentally was the exact same time previously achieved by the GV60. In fact, the trap speed of 110 mph was also identical to the first drag race against the SUVs. Unsurprisingly, the Chevy was faster at the end of the drag race, hitting 119 mph.

It was then time to race the Genesis against a Tesla Model Y Performance and it managed to beat that one, too. This goes to show how far Hyundai, Genesis, and Kia have come in recent years as far as performance in a straight line. It’s especially true considering Kia’s EV6 GT is more powerful, offering 576 hp and 546 lb-ft.

PrevPrevious2023 BMW M2 For US Market To Have 453 Horsepower: Report
NextMeet 11 top cars from the reimagined Detroit Auto Show — where electric rides rule the day | AutoblogNext